Ya know that line in Men in Black when Will Smith puts the suit on for the 1st time?  He looks at K and says “You know what the difference is between you and me? I make this look GOOD”.  That’s what I think the Wicked Queen would say after rethinking her outdated wardrobe and going a bit more……”gothy ho ho Ima kick your ass all the way over to that bitch Cinderella’s castle” attire (surely that’s a dress attire…like business casual?), especially after donning the kick ass headdress from Pure Poison and equally kick ass boots from DRD….I may or may not be in lust with these boots.  And the puppy?  Just adds to allure…cleverly disguises wicked by looking all fluffy and innocent….then ripping your arm off when you go to pet her.  She’s a little dwarf munching ball of fur 🙂 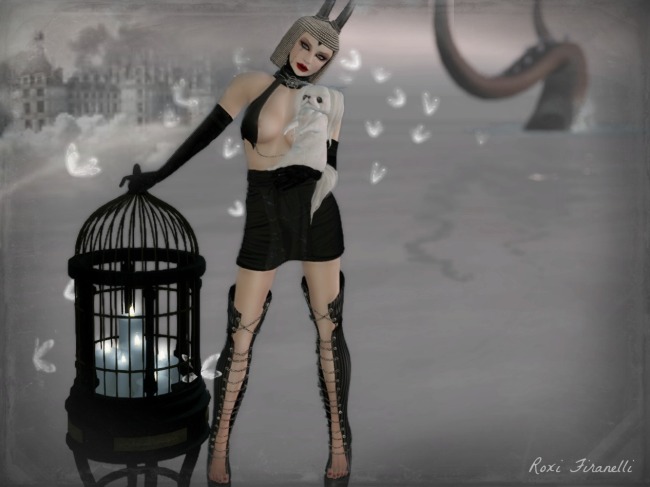 I’ve spent some quality time wandering (spending) through the World Goth Fair and The Dark Style Fair and I’ve started combining with my fabulous chit from the Fantasy Gacha Carnival (where I did a serious amount of “wandering”…and keep going back).  I saw all the Flick’r pictures with the awesome caged raven…so I went with the caged candles (actually called the Nevermore, but hey) from [bauwerk] cause its simply a 10 on the cool-o-meter.  The outfit is actually a combination of 2 outfits, the gloves (awesome) are from MV and go with a dress (equally awesome), the top and skirt are from Sakide and has several different ways to wear the skirt…this is the ho ho length. And am I looking pale? I am!  New gothly pale skin from Apple May Designs…got a darker tone too when I’m not feeling the blood thirsty murderess thing (Tuesdays probably).

Head on over to the fairs and get your dark on!

Taxi to {anc} (you know you want those ephemera) http://maps.secondlife.com/secondlife/Aught/236/184/2