So, Hair Fair is officially closed for the year (sobs) and I’ll bet the farm that records were surpassed in fundraising.  I just had to pop in yesterday to do some last minute shopping…stuff I meant to get in all the time it was open…ya know how that goes…and it was packed!  I mean packed…to the walls….I had to try 2 or 3 times to get in….everybody’s a last minute shopper I guess.  I went to pick up the Frenchie Redux hair from Homage, formally Illmatic, and a few others (okay, many others) ❤

Don’t panic though…there are still many events to wander through and drop copious amounts of lindens.  The Secret affair has hordes of Roman Gladiator goodies, such as this hardly there outfit from !gO!, the shoulder pad/collar from RPG and the amazing wearable/rideable/just freaking rezzable eagle from Black Bantam (Pink Acid *blows kisses to Stasey*) ❤

Illusion Point is still open and getting a decent amount of traffic.  Full of all things fantasy, this new event is going to run monthly and cycle it’s designers to shake things up on a regular basis.  Go have a wander and pick up things like the forest mask/headpiece from Spyralle and the face tat from Arise (love their face tats).  Also, The End has about a week left to wow you with apocalyptic stuffs…rather like this extremely cool body tattoo from Speakeasy.  It comes with Slink, TMP and Omega mesh appliers…which I have to tell you…put me off at first.  I automatically look for Belleza and Maitreya appliers, since those are the mesh bodies I have…and I pass over every tattoo that does not offer either of these.  There is no way in hell I am going back to a system body just to wear a tattoo…that’s like covering Godzilla with lace and hoping to look like Angelina Jolie (no offence to all the purists out there…to each his own).  Anyway….Darth had been bugging me about wearing the tattoo, so I asked a friend, Jo, how complicated it was to do the Omega Appliers.  People…I swear to you…2 minutes.  She tp’d me over to the Omega store, showed me where to get the Maitreya appliers and walked me through putting the omega kit on then clicking the Maitreya applier….BAM….tats appear.  Kisses to Jo for this wondrous tutorial!  The moral of this story is short and sweet….knowledge is power (AND feel free to send me tats now 🙂 )  ❤ 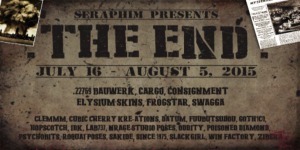