Once upon a Dream – Lana Del Ray

I absolutely love this version of the famous Sleeping Beauty song by Lana Del Rey!  She cut it for Maleficent, which came out what….almost 2 years ago.  It’s not played during the movie, but rather as the closing credits start to roll, so many who tend to leave the theater right away or click off the dvd immediately after the movie may have missed it….and that’s a shame.  If you’ve ever listened to Lana sing, yeah, her songs do tend to sound alike…she has a very specific voice and style…and this rendition is no different.  What is different is that she took a totally innocent song and made it haunting.  It’s suddenly not about young love and innocent dreams, but a more mature love that looks back and recognizes the magic that was and has faith that the other half of the equation will also…eventually.  It sticks in my brain and plays through every now and again and it always gives me goosebumps…and hope.  If you have not heard it, play this, if you have heard it, play this ❤

So this song was playing in my head as I was going through my pose collection and daydreaming last night, the voices of my friends chattering in the background.  I was suddenly struck with a beautiful memory and found myself staring into space.  Imagine my surprise when a few minutes later I looked, really looked, at Roxi and saw she had the same look on her face that I imagined was on mine a moment ago.  One click, which makes Darth crazy, but that’s all it took for this picture ❤

As for details, this is one of the newest hairdo’s from Analog Dog, Gemma, a wild and curly “do” for the more interesting side of you.  The Southpaw tattoo from White Widow is the exclusive @ Epiphany, which opened earlier today and the skin is the newest from Belleza, Faye.  The top is also a new release from The Plastik and can be found in the fabulous mainstore.  Finally, the beautiful pose is part of the pose pack from Bauhaus Movement that can be found at The Liaison Collaborative ❤ 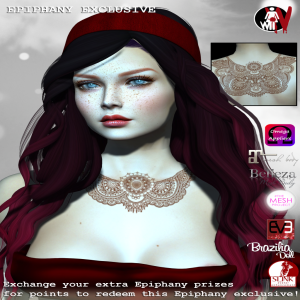