Well….not much of a secret anymore is it?  The Arcade opened this morning and the crowd has gone wild.  One of the gacha machines sure to get swamped is the Le Secret collection from Ariskea.  The rare is this gorgeous cottage…as beautiful inside as it is out.  It’s a true treasure…with many more treasures to decorate it with.  There is also a secret item….no telling just yet!

Several new in store thingies also….new hair from eXxEsS and a smexy new gown from The Plastik.  The Cassis do is long and flows softly down the back…rather like the Mahva dress!

Enchantment closed it’s doors on The Lost Unicorn yesterday, but rest assured you can now pop over to the individual stores to pick up anything you forgot or can’t live without … like perhaps the LODE rare unicorn head accessory or the gorgeous Amalthea skin from Lumae.  There is absolutely nothing from LODE that I do not truly love, I believe I may or may not be a hair accessory ho and they do make the best.  There is just no down side to wearing flowers in your hair!

Opened for 2 days now, the Jewelry & Accessory Expo 2016 is still packing the house.  The theme this year is Cabaret and the designers have pulled out all the stops.  Secrets made this vintage-y pearl necklace and bracelet set for the event ….  perfectly classy and dressed up or down…or hell….no dress at all ❤

Lastly, when’s the last time you went over to Alchemy Immortalis?  I had forgotten how ridiculously cool their chit is!  Darth had to go over there for some reason yesterday and tp’d me over and I just wandered.  Some of my favorite jewelry came from there and the old sim was an amazing place to take pictures.  I had no idea they did poses and I spent a happy 20 minutes testing them all out.  The French Boudoir pose in the picture is one of my finds….seemed like a perfect it ❤ 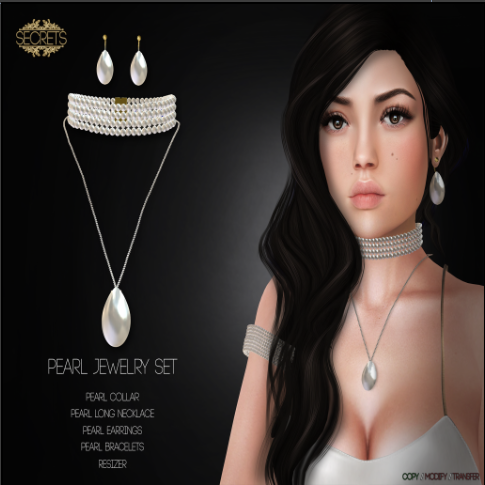