Diawa is deviousMind’s contribution to the first round of Memento Mori, a themed event to the darker goth and adult side. As halloween is coming close, they’ve mixed fetish with some macab and the result is this costume gacha!

Each round of gameplay rewards you with one random color, “Diawa” consists of 3 item sets in 8 different colors each, for a total of 24 commons. On top come 3 unique rares, 2 of them being headpieces, one a spine wing attachment. The rares come with color menu for all 8 common colors to complete the look.  Available colors are pearl, red, pink, olive, mint, teal, gold and black latex.  You can change the metal parts in both commons and rares by menu, the options are gold, silver, bronze and black.   All mesh items are material enabled to make full use of what SL has to offer these days…. but look fantastic without materials of course as well (the gacha key is taken with normal windlight only).

This is a release for the mesh bodies Maitreya “Lara”, Slink “Physique” and Slink “Hourglass”.  Each mesh body fit is played for in its own machine. Please note that the latex suit is on Omega Appliers for broad mesh body support. You need to activate omega scripts in your body to use them. A layer version is added in case you like to use it with classic avatar.  The rares are the same in all 3 machines as those are not influenced by bodies. 🙂

You’ll find the items at Memento Mori during October 1-14, 2016, for 75L per play, and afterwards they will of course stay available at deviousMind mainstore. There is a total of 27 sets that can be collected, 24 common and 3 rare. ❤ 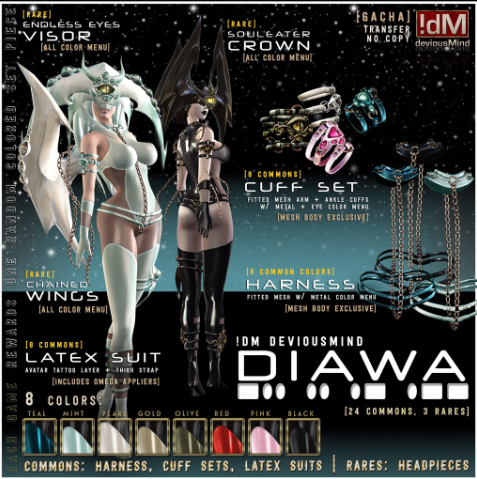