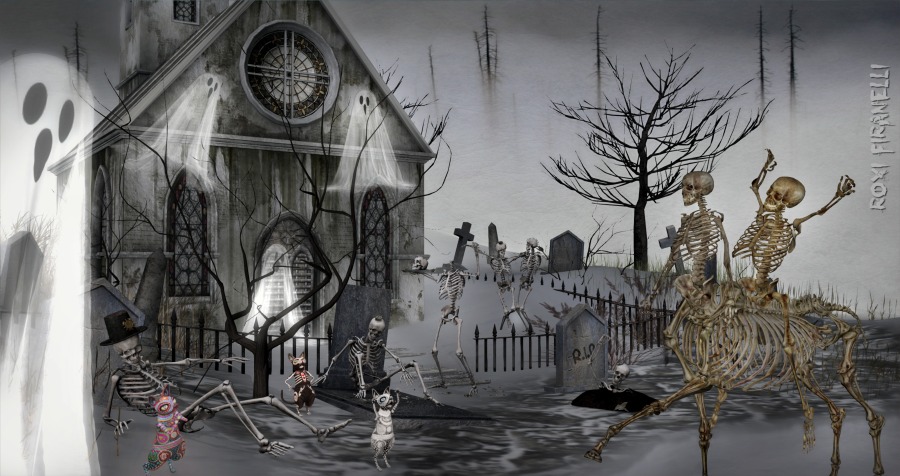 If anyone ever tries to tell you blogging (in SL) is easy, rest assured they’ve never set up a shot with a million (fine… 3) moving animesh critters and/or animated avatars, they don’t know what they’re talking about and they’re probably assholes anyway.  💀

The critters are the newly designed Culprit Sphynxie’s for the Halloween season.  Fiesta, Ghost, and Skelly are all too happy to tag along and amuse the hell out of you and everyone around you.  The HUD has some hilarious animations….one day I’ll find a good reason for the “roach” one and the “Egyptian” one!  I used a different animation for each…and since you can’t wear 3 at the same time or run the hud if they’re not attached, this means I wore them one at a time, placed them, ran an animation, took the shot, and changed to the next.  All while wearing a Jinx skeleton centaur avie who never freaking stops moving, turns every time you click somewhere to move something and just wants to freaking sit when you try to hold still on a pose stand (but man, it’s magnificent when it’s doing its centaur thing). Thankfully the MudHoney ghosties and DaD Party Skullys are static and the Jinx skelly rider stays seated…although there IS a HUD that lets you do some dancing or funny gestures while on your mount.  It was pretty chaotic bringing it all together…along with a lot of laughing and then a lot of pictures that had to get married together.  So worth it though. 💀

So afterward, just for fun, I went shopping and exploring and doing some hunts in my new look…turns out everybody’s dressed up for the season! 💀