I, like many people, have an fanatical aversion to spiders.  I am a science major (although I did not know there was such a thing as sea spiders till Darth mentioned them to me) and I fully understand the importance of the arachnid in the food web, after all, I do not want billions if flies, mosquito’s and other such little insects taking over.  Still…the whole 8 legged body design and creepy movements just freak me out…..not a fan…nope.  I was frozen once as a teenager when confronted by a giant (easily an inch long leg spread, but at the time it could have been a freaking meter) hairy spider in my bedroom.  It was on the floor in the middle of the room…between me and the door….sneaky bastid.  I was terrified, couldn’t move…and I was afraid to take my eyes off of it for fear of it suddenly running and me not knowing where too.  I couldn’t move and the only thing within reach was my dresser.  Sitting on my dresser was my hair spray (yeah..no kidding) and being a resourceful bad ass, I made a grab for it and started spraying wildly in the spiders general direction….all ninja/007 like .  The spray startled the nasty creature…he tried to run…couldn’t.  I just kept on spraying…the entire can full.  By the time I was on empty, there was a pile of goo on my floor, not even a leg sticking out.  Then, because you just never know, I ran to my shelves, grabbed my gigantic Webster’s dictionary and dropped it on the mountain of hairspray.  Then stood on it.  The power of words…mmhmm.  That book stayed there for at least a month, I vacuumed around it, made sure I never accidently knocked it, hypothesized about how long it would take the 8 legged monster to become a skeleton.  I finally talked my dad into investigating whatever carcass was left.  He said it was a pile of goo and what may have been something once alive and took care of the disposal for me.  My hero.

So anyway, it kills me that come Halloween everybody puts spiders on every damn thing…and actually, I tend to do the avoid thing with most of it.  That’s pretty hard to do while walking around Wayward Halloween…freaking spiders every where…but such fabulous chit.  When I do get brave to do something spidery it’s because it’s that well done and worth the ewwies.  That and the creator is a good friend who will owe me soooo big (not naming names here Mr. Ravenghost).  So lets see…the Vertigo tattoo is from White-Widow, so you know it’s quality.  I’m wearing the rare from the gacha and I have a picture of the commons down below.  Also on the spider list is the cascade necklace from EarthStones…so delicate and deadly…also @ Wayward.  Finally…the pièce de résistance ….Ravenghost’s freakishly big black widow spiders.  This is the rezzable version…which moves around on a rezzable web, there is also a rideable….ummm….no thank you.  The Black Widow is the rare, you could also get the commons…which are tarantulas…..shivers…(jeez are they hairy!).

Moving into scary stuff that I like…skeletons and graver markers.  Aphorism made some awesome skeletons for the event and they are just fun to plop all over the place…like in a giant spiderweb (he was in the wrong place at the wrong time) and oOo has gravestones that you can personalize….fun!  I tried to remember all my favorites from the cemetery outside the Haunted Mansion at DisneyWorld…the only one that came to me was “Here lies Fred, shot dead in the head”….poetic.

The landscaping is from Little Branch, an Autumn Tunnel and Orange Maple trees….gorgeous…and can be instantly spooky if you prefer…just add spider webs!  They are currently available at Shiny Shabby, which opened a few days ago. 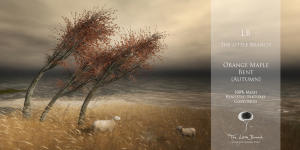 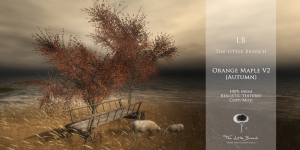