The Liaison Collaborative opened today and the theme is “Newport”.  Think beaches, bathing suits and anything nautical….make it your happy place.  Everyone’s gone all out to bring the vacation to you, so don’t miss out!  Azuchi made this adorable bathing suit, and does it not go perfectly with No.Match’s hair!? I love the lifeguard chairs from Sway’s and the pose/props from LePoppycock are always spot on.  Labyrinth made a male skin, Clifford, which I almost passed on till I remembered that I have a perfectly good male alt (commonly referred to as a malt).  Well…perfectly may not be the term I want to use….he’s still system allll the way…I am so not going to spend thousands to mesh him up (perhaps the prices of mesh bodies will go down one day).  I am so used to my mesh body that I actually forget that there’s a system body underneath….deep deep underneath… like so deep I’d need a 500$/hour psychotherapist to pull it out.  I always forget that the malt is system…till I pull him out and get the scare of my life when the hands and feet come into view….truly horrifying.  This actually worked out though, cause the Clifford skin is for system avies…no appliers at all (that goes for hands and feet also).  All the more reason to put the dock in front and cover those puppies up (you’re welcome) ❤

The Arcade is going strong…the resales on the MP and at yardsales are going even stronger I would say.  I haven’t been yet, everything from the Arcade in my shot was purchased at a yardsale or on the MP with the exception of Sway’s Tipi’s (I blog for her) and every single one of them was purchased at pull price…I don’t pay above pull for commons…and don’t have to, the market is flooded with extra’s.  So I spent what…750L for all the Arcade stuff …. scoooore!  As for Sway’s Tipi’s….adorable and only 50L a pull.  The natural tipi is actually a reward that you get when you play that machine 50 times….and you know so many do…so scooore again! ❤

So anyway…how about taking a sl-cation?  You’ll need sl-cation stuff though (old stuff won’t do) so put your shopping gear on and go beach it up! ❤ 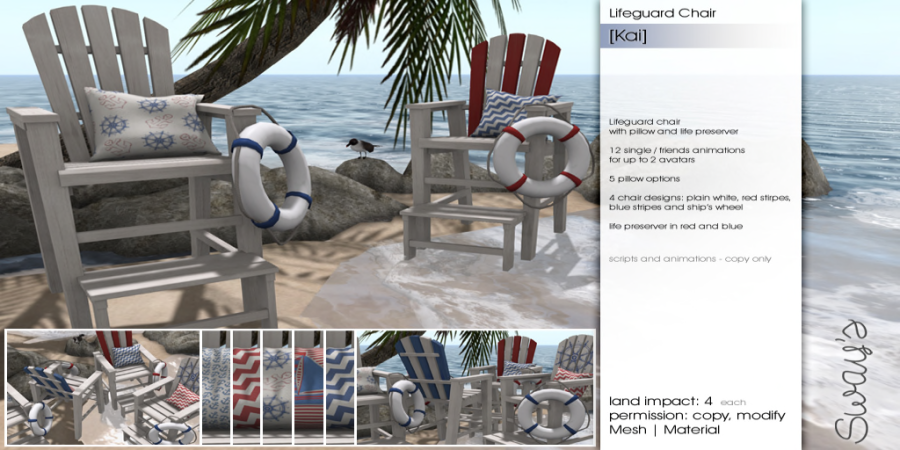 One thought on “Newport”