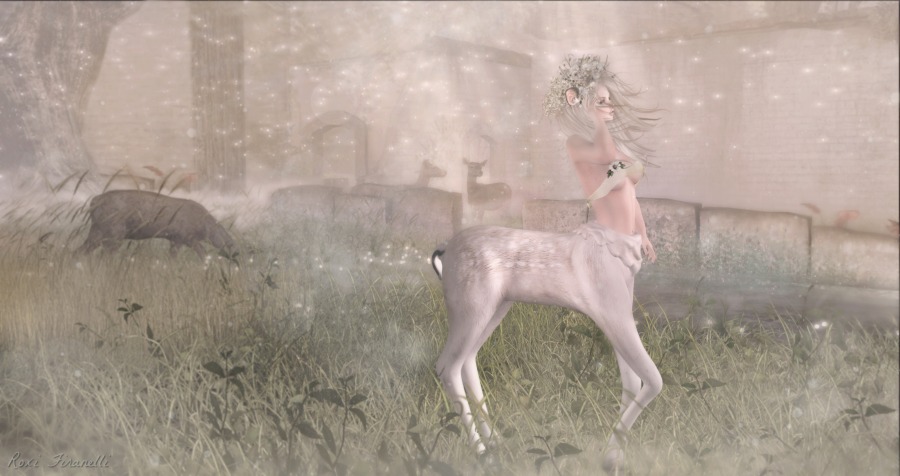 So I’ve moved on from a bubble butt to a fawn butt…and I’m equally happy with both!  When I saw this fawn body in the Tentacio/Psycho;Bytes collection at Epiphany I just fell in love.  Of course, it’s the rare….so I was trepidous about the amount of pulling I’d have to do to get it and the common white ears that I wanted.  I’m happy to share why.  I’m not a fan of having different colors on pulls.  Why can’t we just have the item with a hud that changes colors?  (rhetorical question, I know why, I just don’t like it).  Many times this spurs me right onto the Marketplace to look who pulled the color I like….cause there are no days I’m going to shell out buckets of Lindens for 1 pair of white fawn ears.  It’s just easier to go to MP and pay 10 or 20 L’s over pull…or lots of times the actual pull price… and get what I want.   I don’t put a lot of effort into reselling or trading unwanted pieces unless it’s a rare (I still don’t put the effort in with the rares, I get Darth to do it cause he freaking looooves doing that in groups)  What I have been putting a lot of effort into is cleaning my inventory…which is littered with gacha stuff that I didn’t want in the first place (and 100,000 other things, but that’s another story).  Now don’t get me wrong…I am totally happy to go pull when I like and want everything (looking at you LODE) and for some things I DO want every color (looking at you again LODE)…… but for a handful of specific things….no thank you.  This was why I was so excited when Darth told me that Rhenu had an extra rare deer body, henceforth to be known as “MY deer body”…. I couldn’t give her my Lindens fast enough.  Rhenu is always super fair about her gacha resales and the white ears I picked up on the MP at close to pull….so I truly made out like a bandit and have been prancing around for several days ❤

Speaking of prancing around, the deer body comes with an adorable AO.  She walks and stands still like a doe (all 4 legs), she prances (swear) and she rears up every now and again.  She also has a super cute sit.  The AO actually works with your regular AO…so I still had my regular upper body motions as I was prancing.  Here’s the down side…for a photographer or blogger anyway.  You can’t choose to stop the AO and it’s no mod.  I’d jump on a pose stand and would automatically go into deer sit….I didn’t want deer sit.  The only way I could make myself stop moving was to put an item I was wearing into edit mode… and even then you’d just freeze in that position.  My new Argrace hair, Sayo, has animations that come with it and those will work as they’re upper body, but the rest would just keep on moving.  I did send a notecard to Psycho chick who offered to trade me for a mod version so that I could pose and lo and behold, today May Tolsen of Tentacio sent me a body with no AO in it….perfect!.  How nice was that of them!?!??  Now I’m not saying the un-mod-able AO is a bad thing…just doesn’t work well if you want to get a particular pose for a picture…. and that’s probably just a small slice of SL peeps who only want it for that.  I personally plan on wearing the hooves down to the nubs …  that’s right … this fawn is going to be seen at alllll the SL shopping spots and music venues.  It is truly fabulous for role-play or just…ya know…prancing around ❤

I mentioned the new Argrace hair right!?  Windblown and messy…perfect…AND comes with poses AND mirror versions.  You’ll be seeing a lot of pictures with this ‘do ❤