Zombie Roxi yelling “Stop playing with your toys and come eat before the brains get cold!

Zombie Darth thinking “Jeez, brain stew AGAIN….does she know how to make any damn thing else!?”

Yayyyy…I’m back!!  I’ve been out of town since Monday for work so I have sooo much to catch up on!  My laptop is dog doo doo when it comes to doing anything in SL or PS, so I crashed a lot….really…a lot.  So while sitting at a conference listening to really important stuff *cough cough* I may or may not have been scrolling through Flick’r on my phone (always sit behind a big guy when trying to be invisible) and I saw Jordy’s newest pic as a pirate…..and holy crap….I loved it!  I felt the need to be a pirate…and what do ya know, when I got home today, Jordy had sent me the pirate hat from [deadwool] !!  Whoot!  I was already planning a zombie pic with Sari-Sari’s portable stove so I combined…. and combined….and combined…. 🙂 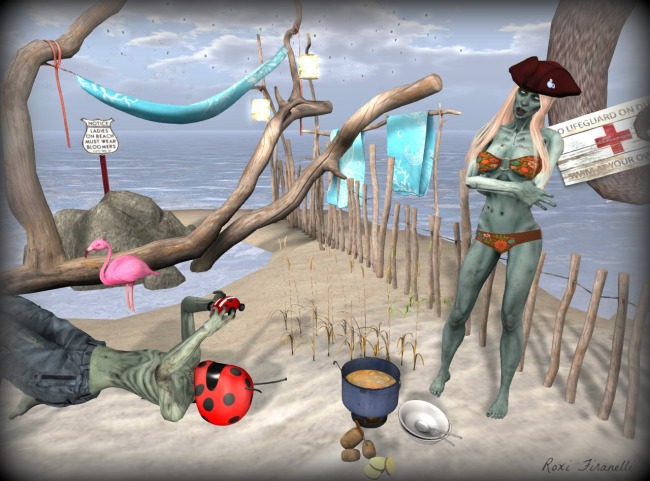 And yeah, I know Sari-Sari’s stove was for The Neighborhood ….which technically ends in…..2 hours…but my flight was delayed (after we boarded of course) and I got to sit on a tarmac and listen to freaking teenagers singing “Happy” …in a relatively small enclosed space….and it’s illegal to kill them.  The only thing more painful is sitting through someone else’s kids dance recital.

So here I sit starting my catch-up with a zombie pic cause they make me laugh, and I so needed that….and putting that tricorn on made me nearly pee myself….so thank you Jordy from the bottom of my heart!

Rhapsody started today and had a plethora of excellent stuffs!  With 8 musically themed sections, you’re sure to find ways to shrink the wallet while being entertained by dj’s and musicians.  It’s only there for the next 2 weeks, so don’t procrastinate!  Zombie Darth’s pose “We are One #5” is from Elephante Poses and is available at Rhapsody.

Level Up is still going strong with its racing theme, which is why Darth is wearing that fabulous Ladybug helmut and playing with the Ladybug racer from [free bird]  (special thanks to Darth for posing…it wasn’t easy).  You can actually race the bug cars using your avatar movement keys!! How freaking fun is that?!  You only have till July 5th to get to the Level Up event and get your race on!

Finally…SummerFest’ 14…..so fabulous!  8f8’s Driftwood collection is, of course, spectacular.  I love the built in poses in the chairs and hammock!  The hammock, towel stand, fence, lights and hammock are all part of the collection…a must have for any beach or deserted island 🙂  Also from Summerfest’ 14 comes the lifeguard sign from second spaces, the flamingo from !ohMai and the bloomers sign from floorplan….love them!! You have until July 13th to go get some summer on!

Finally…really…finally…Zombie Roxi’s pose is from [DM], also known as Dyer Maker and is called “Out of Patience”.  I got this pose way back at the Pose Fair and have used it numerous times.  It’s so perfect when attempting to look irritated…I look irritated…right?

One thought on “Brain Stew”